In David Mamet’s classic film, Glengarry Glen Ross, an arrogant and abusive sales manager informs a struggling real estate sales team that there will be a one-week sales contest. The winner gets a Cadillac. The runner up gets a set of steak knives and the rest are fired. The desperate and brow-beaten salesmen are further told that the company has a set of new “golden” leads of sales prospects. However, they won’t get access to any of them during the contest. Those lucrative leads will be enjoyed only by the winners. During the contest, they will have to work with the old leads, which all the salesmen had been complaining about as weak and unproductive. The salesmen are put in a sink-or-swim situation with only the bad leads for resources and each one is pitted against all the others. The winners will keep their jobs and get access to those “golden” leads. The other “losers” are fired. 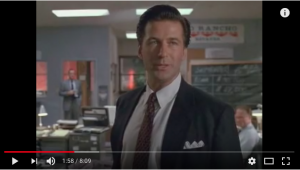 When one of the salesmen complains about the contest and protests being treated unfairly and abusively, he is called a “loser” by the sales manager. The proof he is a loser, he is told, is that the salesman’s car is worth less than the sales manager’s Rolex watch. This intimidates and shuts up the salesman.

This scene in the movie is a close analogy to the situation MLM recruits are placed in. They are given a hopeless challenge, with each one pitted againt the others in a futule quest to build a “downline.” Only a few can ever be at the top. All others are doomed to failure and financial loss as “losers.” The “leads” in MLM include magical “tools” that promise to turn the recruits into “winners” and the big incomes that they are promised will come after they build their downlines.

As in the movie, the MLM proposition is often delivered by arrogant and abusive leaders standing on stages where they flaunt their expensive watches, jewelry, cars and homes, and they claim authority based on their money. As in Glengarry Glen Ross, the message is, “I’m rich. You’re not. So shut up; don’t ask questions; follow the system.”

In fact, the MLM proposition is much worse than Glengarry’s.

As the MLM sales model dictates, and the actual results of MLM companies show, 99% always lose. This is true for all MLMs every year. They lose not in a competitive race, but as part of a money-transfer scheme, a calculated swindle. The money from those at the bottom is siphoned to those at the top. Where else does the money for the winners come from except from those “losers” in the “downline”?