Herbalife is spotlighted among several multi-level marketing (MLM) companies that are debunked in a ground-breaking news documentary on Channel One in Russia, the main television station of that country.

The show is currently only in the Russian language but an English-subtitle version will be released soon.
See  http://www.1tv.ru/sprojects_edition/si5972/fi34455

The show exposed various MLMs for deceptive product claims, absurdly high prices, bogus income promises, and potential health dangers, among other forms of deception. A prominent Russian cult-expert, Alexander Dvorkin, also described the MLM persuasion and enrollment techniques as those of cults. Pyramid Scheme Alert president, Robert L. FitzPatrick is featured in the film, describing MLM as a pseudo-business based upon deceptive claims about gaining income. The show is narrated by famous Russian actor, Igor Savochkin

The Russian TV show refers to the MLM system  as a conspiracy  “to sell something that really is worth a penny, for hundreds of dollars.” In the USA this idea would be described as an organized “racket” involving different parties acting together to evade laws and deceive the public.. 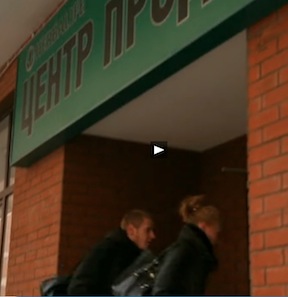 Hidden TV camera enters Herbalife office where the scheme’s protein shake is sold as a treatment for diabetes.

Ironically, as Russian-speaking viewers saw on film Herbalife being deceptively presented as a medical “cure” to an individual who is clinically diagnosed with diabetes, Herbalife announced it had received a consumer product award in the Ukraine.

The award might be viewed as an illustration of the main point of the Russian news documentary. It is that MLM products and the MLM “income” system are a “Big Lie”. The lie is so comprehensive and so aggressive that millions of people believe the lie, despite their direct experience that contradict MLM claims and promises. The lie has the capacity to achieve control over invidual’s critical thinking, as the show revealed in its discussion of MLM as a “cult.”

Though less than 1% ever make a profit in MLM, millions of people are convinced MLM is a “good” income opportunity. Though millions discover the products are overpriced and falsely advertised, their experience is overwhelmed by the fake testimonials, deceptive company promotions and false claims of recruiters. The “Big Lie” is also supported by the lack of government prosecutions around the world for MLM fraud or news media exposés of MLM deception. See the video (in Russian) at: